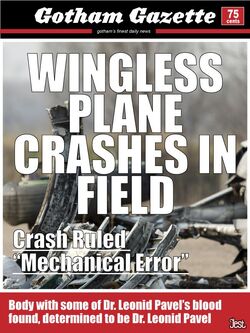 “I guess we’re both suckers” Selina told Batman before kissing him.

She watched as he got on The Bat then took off. The Bat rose above her and flew out of distance with a nuclear bomb hanging from it. She kissed the man who was driving just a minute ago and she didn’t want to admit but she fell in love with that man…and now he was going to die. She promised to herself not to cry but she couldn’t stop a tear from dropping. She got on the Bat-pod and drove off in the direction the bomb was being taken towards. “You can’t die on me Bruce” she whispered as she drove.

She dodged cars that were turned over and went full speed so she could see the ship escape Gotham. She reached the edge of the city just in time to see the ship pass by a building full in smoke.

John yelled angrily at the cops that had just blown up the bridge. He was furious and wanted so bad to do something but nothing he could do now. Their only way out of Gotham was blown out in pieces and the bomb would go off any minute now. He turned and saw a group of kids all gathered around together. He looked at them for a minute before walking towards them.

“Okay everybody get on the bus!” he told them.

“What are you doing!?” the older man asked him.

“Protection from the blast we are going to be alright” John Blake told the kids. “Double top let’s go!”

“Do you think I am going to let this kids die without hope? Come on!” he told them then turned towards the man and told him to enter too. Soon everyone was in the bus but him. He watched as an explosion appeared at the top of a small building.

“All right heads down, this is it!” he yelled at the kids.

“No…” a blonde kid mumbled.

“No, that’s Batman!” the kid next to him shouted.

John turned back to look at the building and noticed that what the kid had just said was truth. A flying black ship he had seen before was flying towards them…not towards them…towards the ocean. Soon the ship passed the bridge from above and continued its way towards the water. John heard cheering sounds from the bus but he felt that even though the bomb was being taken away…that it would kill someone, someone who’s been his hero since a long time ago. He continued watching the ship fly away and tried to see if anybody got out of the ship but apparently nobody did. Batman was still driving it and it didn’t look like he was going to jump. Then the bomb went off and John was forced to take cover. Even though the bomb was far from them you could still feel that power it sent out. He looked back once the explosion passed but saw nothing but the smoke coming from it. He heard the kids cheer once again but he didn’t feel like celebrating. He knew what happened; he knew that the Dark Knight was gone…

Selina watched as Bruce continued his way towards the ocean and pass above a bridge. Her eyes were watery but she didn’t dare let the tears fall. Soon enough she saw the bomb explode along with the ship and Batman. She finally let the tears fall as she was hit by a wave of air. She stood there after a few minutes looking at the place where the explosion took place then finally got on the Bat-Pod and took off.

Bruce or rather Batman reached the beach in nothing but a ripped suit and many cuts. He was injured but not as much as he was when he fought Bane. His vision was blurry and he couldn’t really move but he tried, he wasn’t going to give up.

“You never give up do you?” a voice asked near him.

Bruce turned to find none other than Selina Kyle, Catwoman. She was on the Batpod with a face of happiness that he never saw in her. She ran towards him and helped him up.

“There is no autopilot?” she mocked him.

“There wasn’t six months ago…now, well there isn’t either cause the Bat is gone” he replied.

“No, go to my mansion,” he told her before starting to see black spots. “Heal…money…” he finally said then fainted.

“Even when you’re about to die you brag about your money” Selina continued carrying him. She struggled but was finally able to put him on the Bat pod and take him to the Wayne mansion.

“Let’s go,” Bruce told Selina. They had gathered clothes and money from the mansion and now they were going to head over to Selina’s apartment to pick up whatever she needed then they would erase themselves with the device Bruce gave Selina previously.

“So…I thought you were broke” Selina told him as they walked down the stairs to get on one of the cars that Bruce Wayne still had.

“Always keep a safe stack” he replied then opened the car for her to entered.

“You can’t drive” She glared at him then took the keys and got into the driver’s seat. Bruce looked once last time at his house, the one he grew up with, the one where his greatest goals were accomplished, and the place where Batman was born.

“Goodbye” he finally said then entered the car and drove off with Selina by his side.

Retrieved from "https://batmanfanon.fandom.com/wiki/A_New_Start_(The_Dark_Knight_Legacy)?oldid=6626"
Community content is available under CC-BY-SA unless otherwise noted.