Batman Beyond is a live action TV series created and developed by Geoff Johns, David S. Goyer and Greg Berlanti and focuses on the new Batman of Gotham City, Terry McGinnis, in the year 2060. Michael Keaton plays an older Bruce Wayne, and there are also original characters such as Adam Powers, the son of Derek Powers, Jack Robson, the commissioner of the GCPD. He starts as a selfish and corrupted cop until he starts to change, becoming the heir of the legendary James Gordon. The Penguin, The Riddler and more will return, a new version of the Joker will start to operate in Gotham and Terry will face some new foes as well.

The show ran for 5 Seasons.

The series sets in 2060. Bruce Wayne retired from his double life as Batman, and lives alone on Wayne Manor. Terry McGinnis, a young brat and troubled teenager and the son of Warren McGinnis, a scientist on Powers Industries. When Terry escapes from the Jokerz gang, he finds himself on the Wayne Manor and Bruce battles the Jokerz and saves Terry. Terry takes Bruce to his manor, and before he lefts, he discovers the Bat-Cave and Bruce's bat suits. After Terry's father is murdered for mysterious reasons, Terry starts to suspect on the CEO of Power Industries, Derek and steals the newest Bat Suit and starts to operate on Gotham City continuing Bruce's legacy. Wayne agrees to mentor Terry, helping him to master his skills and improve his qualities. Terry will partner Jack Robson, the new talented Commissioner of the GCPD who tries to become a better man by helping Batman and trying to continue the legacy of James Gordon. Adam Powers, the son of Derek Powers, is a spoiled rich kid. He is a sociopath who wants more and more power and seeks to destroy Batman. Terry will face some new villains such as Derek Powers / Blight, the Joker II and villains from Bruce Wayne's days as Batman such as the Riddler, Scarecrow, Mr. Freeze and more while also trying to balance his normal life and his new life. 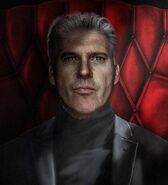 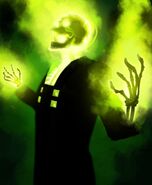 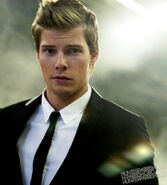 Cameron Monaghan as The Joker II

Milo Ventimglia as Vincent Falcone
Add a photo to this gallery

Bruce Wayne is no longer Batman, after his final retirement 16 years ago. Meanwhile, Terry McGinnis, an irresponsible brat, gets into a fight with the Jokerz and is saved by Bruce. After Terry mistakenly discovers that Bruce was Batman after finding his batsuits and bat-cave. After Warren McGinnis, Terry's father, is murdered for mysterious reasons, Terry steals the Bat-Suit and fights some criminals while spying on Derek Powers. Bruce eventually agrees to mentor Terry and allows him to take the mantle of Batman.

Jack Robson, the talented Commissioner of the GCPD, is targeting Batman since he is dangerous to his deals with Derek Powers. Terry meanwhile is suspecting of Jack and Bruce tells him that Officers in Gotham were always Corrupted. Terry breaks into the labs of Powers Industries and tries to search evidences about his father's works.

Jack Robson decides that Batman is a vigilante and ignores from Barbara Gordon's hesitations. When Terry McGinnis and Dana Tan are attending to a party, a new mysterious meta human attacks them. For the first time, Terry understands that he will need to balance his normal life and his life as Batman.

Terry steals files from the Powers Industries labs and discovers that Derek Powers was in talks with Jack Robson. Terry learns that Gotham was always corrupted and used to be controlled by mobsters like Carmine Falcone, The Joker and the Penguin. After Batman stops a deal of some of the Underworld leaders and Derek Powers, Powers promises to Jack an huge offer for Batman's head.

Vincent Falcone, the grandson of Carmine Falcone and the son of Sofia Falcone, assumes control on the Falcone crime family and meets with Derek Powers and Jack Robson trying to find ways to kill the new Batman. Meanwhile, Terry again gets attacked by the Jokerz but discovers that the one true Joker (Who was active during Bruce Wayne's days as Batman) was a much bigger threat and tries to get some info about him from Wayne.

Walter Shreeve is hired to kill Bruce Wayne by Derek Powers who tries to buy out Wayne Enterprises. Terry nearly discovers about Jack Robson's deals with Vincent and Derek and nearly gets crushed by one of the best robots of Powers Industries.

Retrieved from "https://batmanfanon.fandom.com/wiki/Batman_Beyond_(T.V_Series)?oldid=27851"
Community content is available under CC-BY-SA unless otherwise noted.