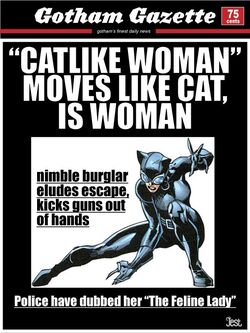 A figure jumped from roof to roof in the city of Gotham. He jumped out of high buildings and landed on another building a few feet away from the previous one without harming himself. He had a rapel gun on his belt which he used when he didn't complete a jump but in the current section he was he didn't needed to use it. He was wearing a completely black suit which had what looked like a blue bird or bat implanted on its chest. He was also wearing a golden belt and a black mask covering his eyes and the top part of his nose.

He stopped and looked at the people below, there were hundreds...no, thousands. Everyone was going to a special event that everyone that lived in Gotham remembered. It was Batman Day, the day the Batman saved the city from the chaos that monster known as Bane and his partner, Talia al Ghul caused. It had been one year since the death of Batman.

He looked as thousands of people were headed to the center of Gotham were they would attend and thank Batman once again from saving their lives. He knew Commissioner Gordon would say a few words like he did when Harvey Dent was believed to be a hero and he knew that everyone in Gotham would attend…including him. He once again continued his way towards the center of Gotham, climbing from roof to roof. He saw a few people pointing at him as he climbed and even heard a few people yell out his name.

They would yell "Look its Robin!" or "It's Nightwing!"

Soon he was climbing the way to the top of a huge building close to the City Hall of Gotham were the statue of Batman was. He watched as a few people entered but the place was full and they blocked the entrance so people would just have to wait outside. Nightwing stood on top of the building in the same position for about five minutes. He took out a small device and started pressing buttons on the screen. Within minutes he could hear everything inside the City Hall.

"I knew the Batman, he was a vigilante, a silent guardian and the protector of Gotham" he heard Commissioner Gordon say. "He sacrificed his life to save the people he believed in. We never knew who he was but we did know one thing…he always was there for us."

Nightwing heard bursts of applause through the device. A few speeches were told after but they weren't really important to Nightwing, he knew most of the men there never met Batman in person. After the speeches in the City Hall everyone headed towards the Robinson park then finally headed back to do whatever they did.

Bruce Wayne changed the channels of the Television in front of him. He was laying in a white couch of his house in Italy. It was dark but he didn't feel like sleeping at all. He continued changing channels then stopped when he noticed the title "Batman Day". He watched for a minutes as he heard speeches from the people of Gotham then he changed the channel.

"Do you miss it?" asked Selina Kyle who just entered the room. She was wearing nothing but one of his shirts and black underwear. She walked towards him then gave him a passionate kiss and seated next to him. "Can't sleep again?"

"No, I am fine just…not tired"

"Hmm…are you sure?" she asked as she place her index finger on her lips. She looked at him seductively. "Well…I am not tired either but I am not in the mood to watch TV"

"What are you in the mood for?"

"Oh…I don't know…" she said seductively once again as she stood and walked back towards the room. "Come and find out" she shouted from the other side of the room.

Nightwing entered the cave located right under Wayne Manor which used to serve as the home of Bruce Wayne (Aka Batman) before he died. Now the mansion was a place for orphanage kids. The cave was the previous headquarters of Batman before Nightwing inherit it.

Nightwing took off his mask to reveal the face of the previous detective known as Robin John Blake. He was more muscular than before and had learned all about the gadgets Bruce Wayne used as Batman that were in the Batcave. He even talked to Lucius Fox a couple of months after the death of Batman so he could help him out with a few things which Lucius agreed after thinking about it for a few days. He didn't know Lucius was the one that constructed Batman's gadgets until he went through the video blogs that Bruce had made.

Robin started patrolling six months after the death of Bruce Wayne. He didn't dare use the suit Batman previously used so he made one of his own with the help of Lucius. They made one similar to the Batman suit but in a Red, Black and Yellow color. The upper body part was color red as well as the arm except for the black gloves similar to the Batman used to use. The lower part of the costume was completely black. The costume also had a long cape and a hoodie. That was the first Vigilante suit Robin ever used. He changed his costume two months after he made it and started using one a bit more darkish which was the one he currently was using. His previous costume remained next to where the Batman costume was.

John walked towards the center of the cave where a small platform was along with a computer. He started looking at the Police files of Criminals but then something caught his attention. It was an image on the news. It was what appeared to be a graffiti painting on the side of a building saying:

Below the three words was a giant green question mark.

Retrieved from "https://batmanfanon.fandom.com/wiki/Batman_Day_(The_Dark_Knight_Legacy)?oldid=5343"
Community content is available under CC-BY-SA unless otherwise noted.