Start a Wiki
Batman Forever is the third film of Batman's initial film series. It is directed by Tim Burton and produced by Joel Schumacher.

The film starts out by explaining the childhood origins of The Scarecrow, Two-Face, and The Riddler.

The film then moves on to the Gotham Cathedral around Halloween time. During a rainy thunderstorm, the cathedral is holding Max Shreck's funeral after he was killed by Catwoman. The people who attended Max's funeral were Bruce Wayne, Vicki Vale, James Gordon, Hamilton Hill, Joe Borg, Harvey Dent, Alexander Knox, Charles Shreck, Alfred Pennyworth and many other Gothamites. Charles said a few words about his father and blames Dent for not being around for Max. Dent explained he was in Metropolis. Vicki and Alexander explained that they were in Metroplois as well, working at the Daily Planet during The Penguin's reign of terror. Gordon then questioned Charles about his father's involvement with the Penguin's plan during the holidays.

The Trial of Charles Shreck

The Rise of Two-Face

A while later, Bruce receives a second riddle and consults Dr. Meridian, who establishes that whoever is leaving the riddles is a "wacko" who is obsessed with Bruce. 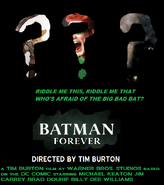 The unreleased prototype poster for the movie.

Dr. Chase Meridian poster
Add a photo to this gallery
Retrieved from "https://batmanfanon.fandom.com/wiki/Batman_Forever_(1995)?oldid=20777"
Community content is available under CC-BY-SA unless otherwise noted.