You think you're crazy? You probably couldn't even spell the word, let alone understand it's definition!

Rogue's Gallery is an American web television series that airs on Netflix, based on characters appearing in publications by DC Comics. The show is an anthology series which focuses on many of the most famous villains and anti-heroes of the DC Universe, as portrayed by an all-star ensemble cast.

Woody Harrelson as the Joker (Season 1) 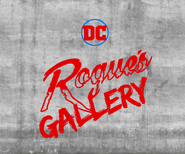 The Joker (Woody Harrelson)
Add a photo to this gallery
Retrieved from "https://batmanfanon.fandom.com/wiki/Rogue%27s_Gallery_(Television_Series)?oldid=25985"
Community content is available under CC-BY-SA unless otherwise noted.