After Bruce Wayne retired, Terry McGinnis took over as Batman

Electric Batarang-Terry fires an electric batarang at his opponent

Flashbang Grenade-Terry fires a flashbang grenade at his opponent, stunning them

Level 3-Electric Claw Attack-Terry electrifies his claws, using them to slash his opponent with energy several times before finishing off with a downward slash

Claw Attack-Terry leaps onto his opponent, clawing at their face and chest until they fall over 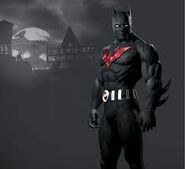 Arkham Skin
Add a photo to this gallery
Retrieved from "https://batmanfanon.fandom.com/wiki/Terry_McGinnis_(Fight_to_the_Finish)?oldid=8653"
Community content is available under CC-BY-SA unless otherwise noted.