"You know who I am. The Batman."
―John Blake to Gordon.

The Caped Crusader is an animated series created by Warner Brothers. It takes place after the events of the Dark Knight Rises. John Blake, after much thought, dawns the cape and cowl, assisted by the returned Alfred. For a while, peace reigns in Gotham, albeit with Commissionar Gordon wondering who the new vigilante really is. However, a young boy arrives at Wayne Manor, claiming to be Damian Wayne, son of the Batman. Ra's Al-Ghoul's magnum Opus, the Court of Owls, make their power play for control of Gotham. And Bruce Wayne himself returns, but not as Batman.

It's a new era. But possibly not a good one. 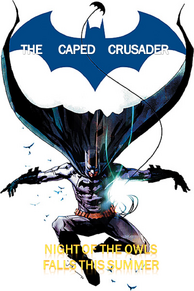 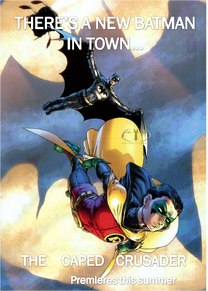 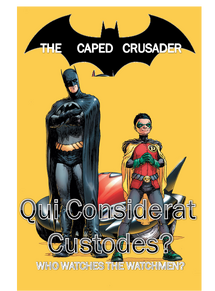 Season 2 Poster
Add a photo to this gallery
Retrieved from "https://batmanfanon.fandom.com/wiki/The_Caped_Crusader?oldid=6395"
Community content is available under CC-BY-SA unless otherwise noted.