The Clown is the leader of the McMafia.

He is a very insane and sadistic individual who enjoys causing mass chaos and hysteria. He enjoys psychologicaly tourtureing people and makeing them suffer.

he has a vast array of knives hidden on him.

He also has an array of other gasses that he stores in grenades. 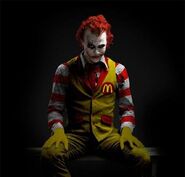 Add a photo to this gallery

Retrieved from "https://batmanfanon.fandom.com/wiki/The_Clown?oldid=8501"
Community content is available under CC-BY-SA unless otherwise noted.