The Joker is a sadistic serial killer opperating in Gotham City, MA . He is belived to be a former member of Red Hood .

Joker has pale caucasian skin,pale blue eyes, and messy dyed green hair. He wears white clown paint on his face, with black lips and black lines drawn from each corner of his mouth in a smile, black around the eyes, and a black triangle above and below each eye.

Joker wears mostly female chlothing, mainly using the colors white and purple (as per his color scheme, being the opposite of Bruce's black and yellow). His main outfir consists of purple pinstripe jeans, with a white blouse with black hearts, as well as black fignerless gloves.  His other main outfit consists of a purple blouse, with black slacks, a black sportscoat, and a purple ribbon-tie. With both, he wears black leather shoes.

Joker's prefferred methood of murder, Strychenine is a poison that, when inhaled, swallowed, or absorbed through eyes or mouth, causes muscular convulsions and eventually death through asphixia. Joker generally carries around syringes filled withis poison. He also uses several other poisons as well.

Joker carries arround several cannisters and/or baloons filled with Laughing Gas, as he is addicted to the substance. He tends to inhale it frequently, and giggles like mad when he does.

While he doesn't carry this with him, per say, a crowbar or steel pipe is his meele weapon of choice.

He carries the lighter with him, and gasoline is easy to come by. He gets a thrill out of starting fires.

His calling card, Joker carries with him an assortment of Joker playing cards which he leaves at his crime scenes.

Joker is a sociopathic individual, who gets off on causing chaos and destruction, and ruining the life of the so called "Bat-Man". The Joker tends to be nihlistic and amoral, and doesn't belive that what he is doing is "wrong". He's aware that it is, but he himself doesn't belive that good or evil exists, and belives that if poeple abandon their "morals" and "social codes", that they will enjoy their life more. In his mind, thats what he's doing. He is living his life to the fullest, and that for him generally means taking the lives of others. He has a morbid sense of humor, frequently telling dark and offensive jokes, and considering life to be a joke, and death as well as all his crimes as the "punch-line". He belives murder to be a form of "art", and tends to photograph all of his victims, and paste the photos in a little book. The Joker tends to be exteamly manipulative, as well as a compulsive liar. He has an anti-establishment, anti-authoritarian, free-thinking, punk-rock mentality. He is also pansexual,and a cross-dresser.

As previously mentioned, Joker is "Amoral", or more precicely, he follows a sort of "Blue and Orange" morality scale, based on things that he enjoys, adn things that he doesn't enjoy. Thus, he belives that murder, arson, assault, and all sorts of other crimes are perfectly OK morally, and he really doesn't care about  laws. The way he see's it, he's doing the world a favor, by showing them there are other ways to live besides under the thumb of "the powers that be".

Joker is a sociopath, and possibly suffers from Antisocial Personality Dissorder. He has an extream case of ADHD, and is extreamly bipolar as well, prone to frequent mood swings. He is a compulasive lair, constantly fabricating stories about his past, and those stories are rarely consistant. Some of the Arkham Care staff belive him to have some sort of "super-sanity", more suited to modern urban life style. They belive that his brain is so advanced that he has no filter over what he percives, and thus no set personality. Acording to this theory, he reinvents himself every day to fit what ever situation he's in. He also tends to be an egomaniac, belving himself to be "uncatchable".

Nothing about his life prior to joining Red Hood is known.

He was once the person known as Red Hood #2. When Batman foiled the Red Hoods' plan to gas the entire city, Red Hood #1 was thrown into a vat of chemicals, while red hood #2 was covered with hydrogen peroxide and chlorine gas, the two chemicals the gang had planned to use against Gotham. After the explosion at Apex chemicals, #2 was taken to the hospital. After two days, he removed his bandages and saw the damage done to his face. He was scarred with burns, his face was extreamly pale, and his lips were tinted black. He then decided to simply get revenge against all of Gotham.

Joker first appeared in Gotham upon strangling a young girl in the streets with her scarf. He later sent a letter to GNN, claiming responsibility for the crime. He also stated that he would next kill Henry Clarige, and that there was no way to stop him. He went on a killing spree, murdering the riches Gotham in several differant ways. However, he had been leaving hints in his letters that he planned to kill everyone in Gotham by poisoning the resevouire. He was intercepted by the Batman and thrown off of the roof. He survived, but with several broken bones. He was found not guilty by reason of insanity (partially due to a paid-off jury), and sent to the Arkham Home for the Mentally Ill .

Like batman, I wanted The Joker to be portrayed realisticly, while taking him back to his golden age origins, as a straight out murderer, who killed for both pleasure and profit.

This version of Joker does have the chemical disfigurement like the original, however it is not as drastic. He is just extreamly pale, and it's only his face. Most of the white comes from face paint. Also, having him simply wear face paint allows for him to be a master of disguise,as he was in the golden age. The cross-dressing thing was added because I figured that soemone calling himself The Joker would go out of his way to be strange or different. Also, the photo that served as my inspiration had him wearing a white blouse with a heart-print pattern.

Inspirations were Charles Manson, Jane Toppan and The Zodiac Killer, as well as Alex DeLarge from "A Clockwork Orange", Jeff The Killer, and Tyler Durden from "Fight Club". He also will be a little bit like hannible lecter when inside Arkham Care. 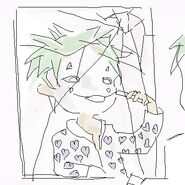 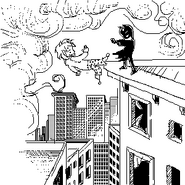 Being pushed off of the roof.

Without face-paint
Add a photo to this gallery

Retrieved from "https://batmanfanon.fandom.com/wiki/The_Joker_(BATMAN_ALT)?oldid=16084"
Community content is available under CC-BY-SA unless otherwise noted.