The Joker is a sociopathic serial killer, and the arch-nemisis of The Batman .

Joker's history is mostly unknown. What is known is that he's been insane seince childhood, and that somewhere along the lines, he got his trademark smile. At one point in time, he was a cimminal known as "The Red Hood", or was in a gang called "The Red Hoods", or something simmilar. His real first name is Jack, but his last name is unknown.

He first appeared publicly in Gotham when he sent a letter to The Gotham Post, claiming that he was going to kill Henry Clarige at midnoght, and steal the Clarige diamond. Even with the police and Btaman guarding Clarige,Joker still amnaged to commit the crime, leaving a fake diamond and Joker playing card in the vault with the diamond. For two weeks, he continued to terrorize Gotham, announcing those he was going to kill, and then getting away with it. Eventually, batman realised that Jokekr was using a time-released poison to kill his victems, and was acctually commiting most of the crimes one day earlier. With this info, batman was able to stop The Joker's next murder from happening. Batman further went on to figure out The Joker's plan to gas Gotham City with Chlorine Gas. Batman stopped him, savagely beat him, and sent him off to the Crane Institute for The Crimminally Insane.

Joker has long messy green hair and greyish blue eyes. His mouth is stretched into a perminate grin, with 1 inch glasgow scars trailing from the corners. His skin is tinted paper white due to an exposure to vasta mmounts of chlorine, and his lips are black from the cell-scaring caused by said chlorine. He wears a purple button-up shirt with a black dot-pattern, a purple lace-lie, a black sportscoat, aswell as black slacks, black leather shoes, black gloves, and a black fedora.

Joker is a sociopathic killer with zero empathy. He suffers from Schitzoltypal Persoanlity Dissorder aswell as Antisocial Personality Dissorder , and is a sadomasochist. He likes collecting knives, guns, and art, and loves making explosives out of anything he can. He is a criminal genius, and is an intelectual match for batman. He enjoys outwitting batman, and murdering innocents. He is an objectivist, opportunist. nihlist, and is about as loyal as a boat left untied at the docks.He is pansexual, and has had almost as many "girlfriends" as Bruce Wayne. The only differance is that Joker's all tend to die off, weather by him, or someone else. He doesn't know why he keeps dating them, as he really only loves Batman (in his own, special way). He tends to flirt with batman, and anyone else he meets, simply because it amuses him to see their reactions. He views the world in a Blue And Orange Moralityscale, and thus has no comprehension that what he does is "bad".

Joker has two amin types of poisons that he usuas to kill his victims. The first causes the victims' lungs to fill up with blood, causing them to caugh themselves to death. The coughing sounds simmilar to laughing. He also uses chlorine gas to kill people.

Joker uses a large assortment of knives, usually having the blades laced with his Joker Venom.

Joker occationally uses guns, when he needs to be able to engage on quick combat. The bullets, like his knives, tend to be laced in Joker Venom. 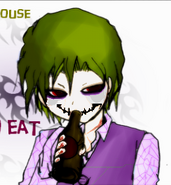 Joker, drinking beer (or something simmilar)
Add a photo to this gallery
Retrieved from "https://batmanfanon.fandom.com/wiki/The_Joker_(mailjesuru%27s_continuity)?oldid=15440"
Community content is available under CC-BY-SA unless otherwise noted.