Start a Wiki
The Penguin was the alias of Oswald Chesterfield Cobblepot. He was a deformed man who was abandoned and raised in the sewers as a baby. He carried deadly weapon concealed umbrellas and his horrible past turned him into a bitter and ruthless psychopath.

Around Christmas time in Gotham City, the aristocratic Cobblepots gave birth to a baby boy. Because the child was deformed, they locked him in a black box, where he showed his first sign of homicidal tendencies when he strangled the family cat to near death. Disgusted, they ventured out into the snow and dropped their vicious baby in the sewers. Eventually the Cobblepot baby washes up onto the shore of the Arctic World exhibit show at the Gotham City Zoo.

He appears as a hallucination that Batman has thanks to Scarecrow's fear gas. 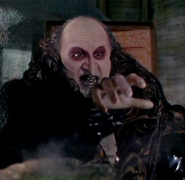 Batman Returns The Penguin Action Figure (Kenner 1992)
Add a photo to this gallery
Retrieved from "https://batmanfanon.fandom.com/wiki/The_Penguin_(Danny_DeVito)?oldid=19141"
Community content is available under CC-BY-SA unless otherwise noted.