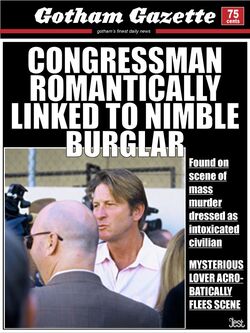 John Blake went through his computers looking up information for the mysterious person with the green question marks. He heard about a few people say it was the Joker but Blake knew that it wasn’t, the Joker was in Arkham Asylum along with a few other criminals. John hadn’t join the police when the Joker attacked the city 8 years ago, he saw on the news as the crazy criminal killed cops, exploded hospitals and challenge the Batman. The Joker was caught by Batman and taken to Arkham right after his capture. Arkham Asylum got a little of security shortly after the Joker’s capture in order to keep him from escaping.

“Hmm…” John Blake looked at the pictures carefully trying to find what his sudden discovery meant. In each picture there was a reflection of a small part of the title of a building. He looked at the words then wrote them down. He quickly solved the puzzle.

“Purple Mark Club!” he yelled to particularly no one. He rose from his chair and walked to the motorcycle Lucius made for him. They became really good friends after they met and managed to help each other often. The motorcycle Lucius made for John was similar to the Bat’s but a bit smaller, smaller wheels and it was dark blue and black. Soon he was riding off towards the club.

Nightwing stood on the roof of a medium sized building. He was looking at the people inside the club through the glass window on the center of the roof. The window was right above a pair of empty tables. He looked inside to see if there was any suspicious activity but he didn’t spot any. He kept looking for someone to do something but they just drank and dance. He was about to leave when three men entered the club, they were buff and were wearing purple masks and green suits. Nightwing had no idea who they were but he had a feeling they were related to the Green Mark.

The three men were carrying pistols. Nightwing studied the situation real quick then decided to finally enter the club and find answers.

He jumped through the window and landed on the table. “Mind if I interview you boys?” He said then jumped out of the way as one of the men shot at him with his pistol. Nightwing took out his two black Eskrima sticks after throwing a blue disk at one of the men hitting him on the chest making him fall backwards. The blue disks were similar to the Batarangs Batman previously used; they were basically the same thing just in different shape and color. The other two tried to shoot him but when they noticed he was too close to them they decide to throw in some punches.

Nightwing blocked the first punch and managed to kick the other one on the face. He hit one on the stomach then hit the other knocking him out. Only one left…

Nightwing punched the other one on the gut then pushed him towards the wall. “Who are you working for?” he asked.

“I won’t tell you anything…” the thug spat back.

“Are you sure?” Nightwing replied then slapped the guy. “I have all night fatty”

The man in the green suit tried to punch him but Nightwing managed to duck and push him up against the wall once again.

“I am going to ask one more time,” he said slowly. “Who are you working for?”

“You don’t scare me”

“We’ll see about that” Nightwing said then pushed him to a window. They were on the second floor meaning that if he fell out the window, well he wouldn’t die but it would definitely hurt. Nightwing pushed him harder against the window and you could’ve heard cracking noises coming from the window.

“F-Fine!” the man shouted. “They call him Riddler!”

“Yes, he works at a building on Crime Alley”

“Yes, he told me to give you this” the man said then handed him an envelope. Nightwing hit him on the face with one of his sticks knocking him unconscious then left the scene.

Bruce woke up next to a beautiful girl with dark brown hair on his chest. He tried his best to get out of bed without waking her up but unfortunately he didn’t achieve his goal. He could’ve escaped any girl in the past who was on his chest or maybe even completely on top of him but with Selina it was a different case.

“You know this is what I hate about you” she complained. “Why don’t you wake up like every other normal husband does?”

“Where did you hear that?” she said with sleepiness in her voice. “Wake up at 1 pm for god’s sake”

“I won’t be the only one to wake you up at this time” Bruce replied then went to lie in bed with Selina once again.

Baby cries where heard just outside the room. “Are you sure about that?” teased Bruce.

John Blake stood in his room at the Wayne Manor. It wasn’t that big but it was at least something, he decided help out there and volunteered as a guardian though he looked more like a security guard than a guardian. He shut down the entrance to the elevator right after the orphanage open, he didn’t want any of the kids to accidently find the lair of the legendary Batman. He didn’t really spend much time at Wayne Manor though; he worked at Wayne Industries during the day then helped out the Orphanage a little then finally spent the night working as Nightwing.

He sat on the small soft bed in the room and turned the TV on to see if anything interesting was happening. He was switching channels when he noticed the name “Dr. Jonathan Crane Missing”

John raised the volume a little to hear about the sudden disappearance of Crane also known as the Scarecrow. He watched as they said that Jonathan Crane went missing the previous night from Arkham Asylum. Then he thought of a possible theory…the Riddler took Crane. He had no idea why Riddler did it or if this meant good news of bad news but he was 90% sure that the green gas S stood for Scarecrow. He knew he needed to find them before they caused any trouble…

Retrieved from "https://batmanfanon.fandom.com/wiki/The_Question_Mark_(The_Dark_Knight_Legacy)?oldid=5423"
Community content is available under CC-BY-SA unless otherwise noted.