The Tomorrow Knight is a TV series based on Christopher Nolan’s Batman film trilogy, acting as a sequel to The Dark Knight Rises and also showcasing events in between The Dark Knight and that film. The series was written by Nolan himself and co-written by Paul Dini and Frank Miller with casting by Miller. It continues the story of The Joker and features John Blake’s transition into a reimagined version of Robin that continues Batman’s goal of protecting Gotham City as the threat of The Joker returns, this time alongside Harley Quinn and the mob.

Shortly after the events of The Dark Knight, The Joker, locked away within the depths of Arkham Asylum, seduces a young psychiatrist, Dr. Holly Robinson, and eventually carves a smile similar to his into her face, and she subsequently becomes Harley Quinn. She breaks him out of Arkham and the two escape Gotham City.

Nearly a decade later, former police officer John Blake inherits the Batcave of Bruce Wayne and gives the Batsuit a redesign. He abandons the cape, cowl, and bat theme altogether and begins using his birth name Robin as he infiltrates Gotham's mob, which is ruled by fashionable mobster and pimp Oswald Cobblepot who owns the Iceberg Lounge, alongside his right-hand man Eddie Nashton, a sadistic murderer who leaves clues at his crime scenes. Meanwhile, The Joker and Harley Quinn, hearing the news of Batman's death, return to Gotham to reign terror. 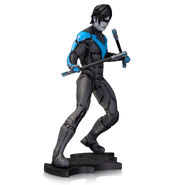 Retrieved from "https://batmanfanon.fandom.com/wiki/The_Tommorow_Knight?oldid=16259"
Community content is available under CC-BY-SA unless otherwise noted.