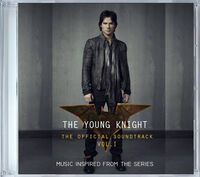 The Young Knight: The Official Soundtrack - Vol. I (also known as the Wayne Mix) is the first of two soundtracks that showcased music inspired from the series. Vol. I features music from seasons 1 to 5. The soundtrack overall features a total of 32 songs split up in two discs.

Retrieved from "https://batmanfanon.fandom.com/wiki/The_Young_Knight:_The_Official_Soundtrack_-_Vol._I?oldid=17378"
Community content is available under CC-BY-SA unless otherwise noted.