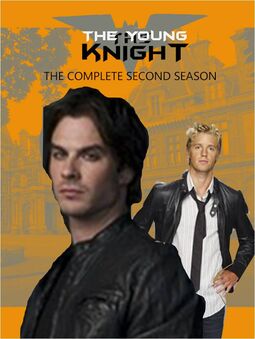 Season Two of The Young Knight is the second season of the series that chronicles young Bruce Wayne's troubled life as he tries to adjust what happened after his parents’ tragic murder and the years before he became Batman.

This season sets right after the events of the previous season’s finale. Bruce will be more involve with Wayne Industries while his relationship with Julie grows closer. Julie will face multiple obstacles from the aftermath of her car accident to facing a horrible attack. Jason and his new girlfriend, Anna Davison, will go up and down throughout the season, but Anna has secrets that could threaten Jason and his family. Leo will do temporary jobs including one in Arkham Asylum and continue his personal reporting. After being shot, Victor will hunt down his shooter while continue being devious and manipulative. Detective Alder gains a new partner.

The second half of the season will deal with a conspiracy roaming around Wayne Industries. When everyone including Bruce learns of the conspiracy and the group involved, Gotham City could be in danger and the Wayne Legacy will could be corrupted forever forcing Bruce to go to a side he never thought he had.

Along the season, Bruce will encounter old ghosts such as Talia Al Ghul, teamup with Wildcat and Black Canary; and face off against his future foes such as Scarecrow, the Black Mask, Spellbinder, and the Huntress.

Retrieved from "https://batmanfanon.fandom.com/wiki/The_Young_Knight_(season_2)?oldid=20580"
Community content is available under CC-BY-SA unless otherwise noted.