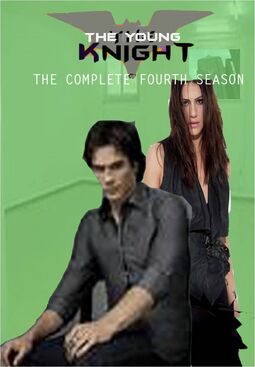 Season Four of The Young Knight is the fourth season of the series that chronicles young Bruce Wayne's troubled life as he tries to adjust what happened after his parents’ tragic murder and the years before he became Batman.

This season is set a month after season three's finale and focus early on right after the aftermath of the Los Diablos attack on Gotham. Alfred, Leo, and everyone else must deal with Bruce’s death. While Bruce is reportedly dead, his greedy uncle Philip Wayne arrives to take ownership of the Wayne Legacy. However, Philip fails to take over Wayne Industries when Allison Carter has suddenly risen to become the new CEO. Leo and Alfred investigate one of the mourners who is eventually identified as Adam Hanson; and things get more interesting when Bruce is soon discovered to be alive and well, but is hiding in Witness Protection; Adam is soon discovered to be the illegitimate son of Thomas Wayne and Bruce’s half-brother. After realizing the real truth of Adam, Bruce is forced to go back to his old life and abandon his new life.

Julie and Mike have a turbulent relationship while she conflicts her real feelings toward Bruce. Jason and Victor nearly survived that car bomb, and now must keep their lives under secrecy until they feel its safe; Jason uncovers a secret his family has been keeping for years while his control of PowerCorp is slipping; Victor has been harboring a secret army, the Domino Guards to capture every Phoenix-infected and jail them in a hidden level, Level 7, deep in Arkham Asylum. Leo tries to get his old job back, but discovers new ways while being unemployed. Vicky Vale arrives to Gotham to become a reporter, but several obstacles try to delay her moment. Gina Faust surprisingly returns and keeps a dangerous secret away from Bruce and the others.

During the season, some DC characters that also appear in the Batverse will make their first appearance such as: Vicky Vale, Zatanna, Etrigan, and The Crime Doctor. Gina Faust and Spellbinder will return.

Retrieved from "https://batmanfanon.fandom.com/wiki/The_Young_Knight_(season_4)?oldid=17650"
Community content is available under CC-BY-SA unless otherwise noted.