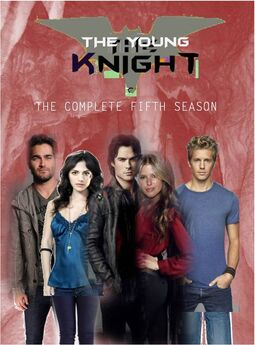 Season Five of The Young Knight is the fifth season of the series that chronicles young Bruce Wayne's troubled life as he tries to adjust what happened after his parents’ tragic murder and the years before he became Batman.

The first half of the season deals with Bruce and Julie’s engagement; Bruce finally learning the person responsible for his parents’ murder and the confrontation; Simon Duke’s mysterious arrival and his mind games with the Powers; Leo being a pawn for Victor; and the stopping of several escapees of Level 7.

The second half of the season focuses on Bruce’s emotional recovery from losing Julie and learning his parents’ murderer; Henri Ducard guiding Bruce back to the light; Leo and Vicky exploring their relationship; Justice League helping Bruce stopping Lex’s partnership with a mysterious being; Allison Carter’s return; Jason facing legal trouble; the rising Falcone family; Julie makes her return; Bruce trying to stop Simon as Simon cripples Gotham City from within.

Retrieved from "https://batmanfanon.fandom.com/wiki/The_Young_Knight_(season_5)?oldid=17652"
Community content is available under CC-BY-SA unless otherwise noted.