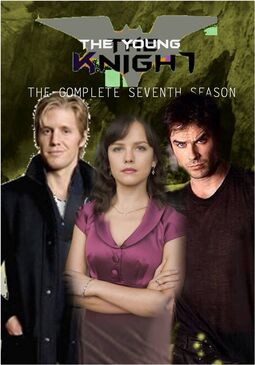 Season Seven of The Young Knight is the seventh season of the series that chronicles young Bruce Wayne's troubled life as he tries to adjust what happened after his parents’ tragic murder and the years before he became Batman. All these episodes now air on Wednesdays 7/8c.

Bruce returns from his mystic quest and must face against new adversaries who pose a threat to Gotham City. While he contends with his future, he decides to seek help with Henri Ducard. Bruce wants Ducard to be his mentor again and wants to shape be a better hero. With Ducard’s help, Bruce defends off against Vandal Savage, Dagger, and others. However, Bruce has no idea Ducard has a duplicitous side when Ducard suddenly offers Bruce an invitation to the League of Shadows.

Focused to complete his destiny, Bruce joins the league to contend with several dangerous tasks which will lead him to a deadly syndicate known as Omega and the true leader of the League of Shadows, Talia’s father, Ra’s Al Ghul. Leo creates his own Facebook-like site only for news, but discovers the consequences of exposing Gotham’s secrets and lies. Jason still trying to forget Project Titan, regains control of PowerCorp only to learn secrets of Omega. Talia is forced to have two relationships between Bruce and Jason, but realizing she needs to choose one; as well learning her father making his stay at Gotham. Vicki finds new ways in reporting while trying to find true love, Jim Gordon becomes a much more prominent figure for Gotham, Victor puts himself in peril he can’t get himself out of, and Alfred is there to sweep the dirt. Everyone in Gotham will discover secrets and surprising returns that will shock them all; criminals are still trying to surge back to take over the city.

Retrieved from "https://batmanfanon.fandom.com/wiki/The_Young_Knight_(season_7)?oldid=20345"
Community content is available under CC-BY-SA unless otherwise noted.