Start a Wiki
Half man and half madman, Two-Face was the alias of former Gotham City District Attorney Harvey Dent. After receiving brain damage by Charles Shreck's acid, Dent became a bloodthirsty, eccentric, homicidal maniac with a penchant for using a coin to determine all of his actions.

Harvey Dent had a lot of anger issues. This was because of his abusive alcoholic stepfather beating him constantly through the decision of a coin flip. On that night things got way out of control. Christopher Dent decided to aim a gun at his stepson, the latter of whom called the police while hiding in his closet. Christopher is arrested and sentenced to 25 years at Arkham Asylum, there he hangs himself in his cell. Harvey is put in a foster home.

DA Harvey Dent had recently been elected and vowed to bring the wave of crime to a halt by getting "Boss" Carl Grissom in court and convicted.

He was in Metropolis.

Harvey Dent served Gotham City as its District Attorney. He was an ally of Commissioner James Gordon and Batman. He attended Max Shreck's funeral, only to be yelled at by Charles Shreck. While questioning Charles in court over the chaos that happened in Gotham City during the holidays (This was because of Max's involvement with the Penguin's plans), Charles managed to retrieve a hidden flask of acid from Sal Maroni's pocket and threw it on Dent. Batman had become aware of this plot, and ran through the courtroom to save Dent, but he arrived too late. The acid splashed against the left side of the DA's face, and horribly disfigured it, while the right side was protected by Dent's notepad. The acid burned far enough through his head that part of his brain was damaged, making Dent half psychotic and homicidal. At the hosptial, when the doctor unraveled the bandages around Dent's head, he is horrified to see the left half of the DA's face hideously disfigured. He bursts out of his hosptial room, with his fiancee asking him what happened. The moment Gilda saw Harvey's scarred face, she had a heart attack and died. He paid a visit to Sal Moroni, then killed him. At his lair, which was split in half like his personality, he had two henchwomen, Sugar and Spice, who worked for him. Spice favored his 'dark', scarred side, while Sugar favored his 'good' side. Two-Face traveled to the circus looking for Batman with the circus currently holding a fundraiser attended by Gotham's elite, Two-Face concluded that the odds were excellent that at least one of them knew the Dark Knight's identity if they weren't Batman himself, and threatened to blow the place up unless his enemy turned himself over (although the subsequent riot in the circus prevented Bruce Wayne obeying his order). He was responsible for the origin of Robin because when the Flying Graysons tried to stop him, they were all killed by Two-Face apart from Dick, the youngest Grayson, who went on to join Batman as Robin. Two-Face joined forces with The Riddler and Scarecrow. Following this, they traveled to Wayne Manor and the Riddler destroyed the Batcave. Two-Face and Scarecrow, on other hand, had their henchmen attack Azrael and Dr. Chase Meridian while Two-Face was flipping his coin, which kept on landing good side up, preventing him from doing any wrongdoing. As soon as the scarred side came up, he fired his pistol at Azrael, grazing him in the head. Two-Face tried to finish him off, but the Riddler intervened and they left, kidnapping Vicki and leaving behind a riddle, but Scarecrow wasn't finished yet. Scarecrow chopped a screaming Chase's head off as a way of getting back at her for firing him. At the Riddler's lair Claw Island where Two Face was hiding out, Batman and Robin got separated.Robin had the opportunity to kill Two-Face but didn't want to be like him. Two-Face used this to capture Robin. The Riddler then tried to make Catwoman choose between Vicki and Robin while Batman was going after Scarecrow, but she saved both by sacrificing her last life when she threw herself into The Riddler's Box core. Two-Face flipped his coin to decide if he would shoot Robin, but Batman tossed a handful of identical coins into the air. Two-Face panicked and tried to find his coin but stumbled and fell into the pit on a watery bed of spikes. The coin then fell good side up into Two-Face's open palm before he sunk underwater. 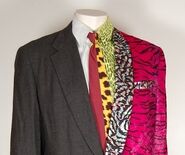 Two-Face's suit.
Add a photo to this gallery
Retrieved from "https://batmanfanon.fandom.com/wiki/Two-Face_(Billy_Dee_Williams)?oldid=22688"
Community content is available under CC-BY-SA unless otherwise noted.