Who's the Bat? is a advertising campaign to promote the new series The Bat. The campaign involves the thoughts of Gotham citizens on the Batman. The campaign is in different forms of media, such as newspaper, television, interviews, blogs, and books. New content will be added frequently. 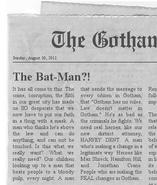 Add a photo to this gallery
Retrieved from "https://batmanfanon.fandom.com/wiki/Who%27s_the_Bat%3F?oldid=15102"
Community content is available under CC-BY-SA unless otherwise noted.